As we briefly explain it here, Network Device Interface (NDI®) is a high performance standard developed by Newtek that allows anyone to use real time, ultra low latency video on existing IP video networks.

Newtek NDI tools is a FREE suite of powerful applications designed to connect to any device, in any location, anywhere in the world – and transmit live video to wherever you are. NDI tools download is available from www.ndi.tv/tools

Once installed, you can execute the "NDI Launcher" (that you should find on your desktop) to get access to all these free NDI applications shortcuts below: 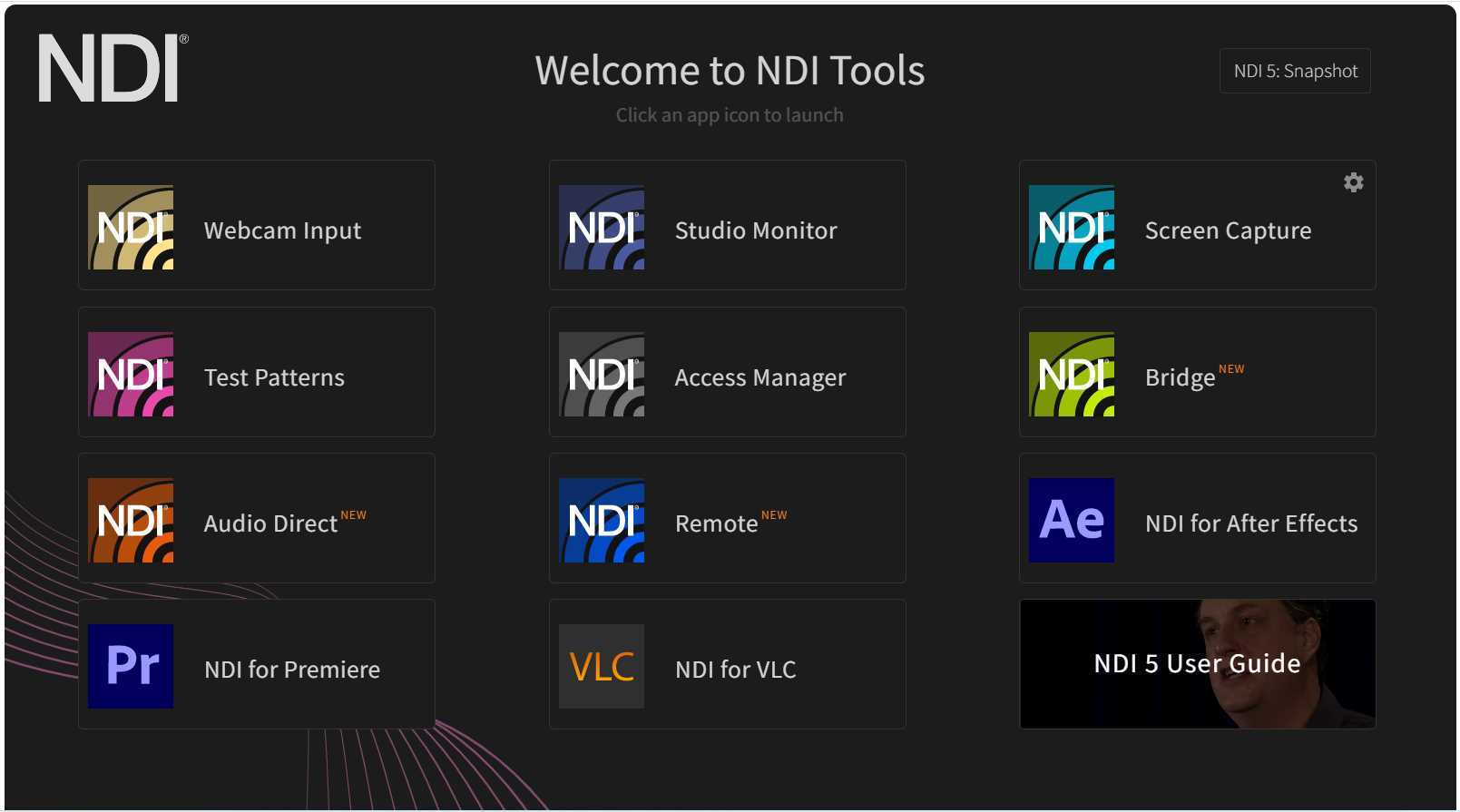 On www.ndi.tv/tools, you can click on each application to have a more in depth explanations with copyscreens and videos however below we will give you already a very interesting brief overview:

Since the beginning NDI kept developing new features along with free applications as described below and in July 2021 we reached the important 5th version, called NDI 5, to bring "planet-sized capabilities designed to make any live content production even easier, faster and more fun", including these new applications:

- NDI Bridge : Simply and securely share all NDI network sources between local or remote sites (and not only sharing a connection between 2 remote devices), anywhere in the world, using only a single network port (AES256 Bit encrypted, with RUDP for transport)... this will help you to solve all the complexity of remote sources, supporting all of the benefits of NDI, including alpha channel, KVM, PTZs, tally, metadata and much more.. no matter now the location: imagine the hardware on one site, the control and production on another, graphic work on another... which also helps to reduce costs! 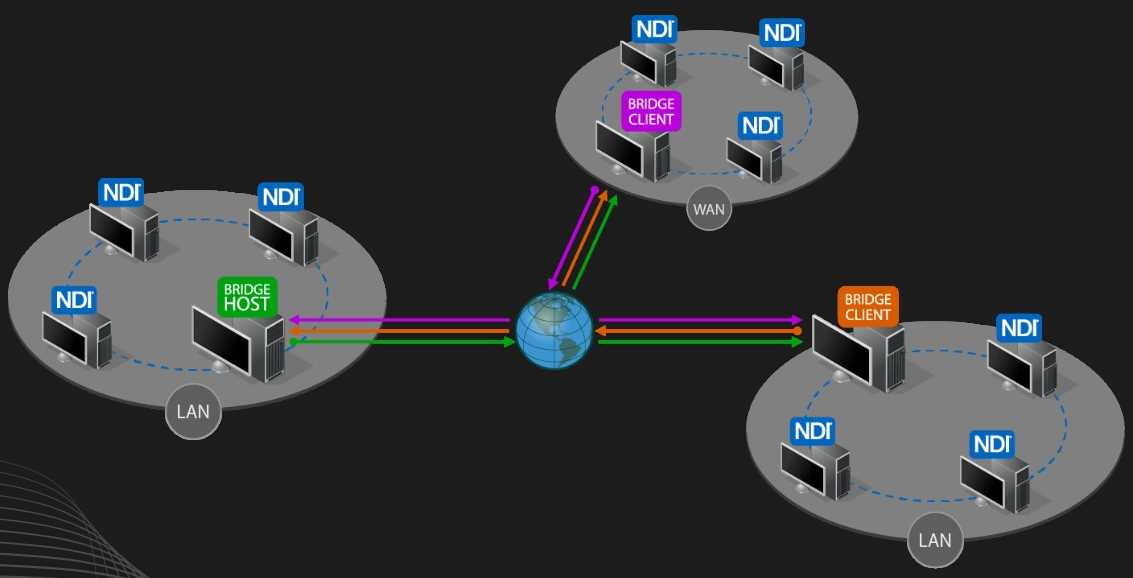 (This setup requires a public IP address per site, and to do a port forward in the routers)

- NDI Remote: By sharing a simple link or QR code, anyone can contribute live audio and video using any Internet-connected camera device with a browser, to any NDI enabled software over the web. Perfect tool for live production!

To start sending video to a remote connection, the sender simply taps the NDI button in his browser at remote.ndi.tv : 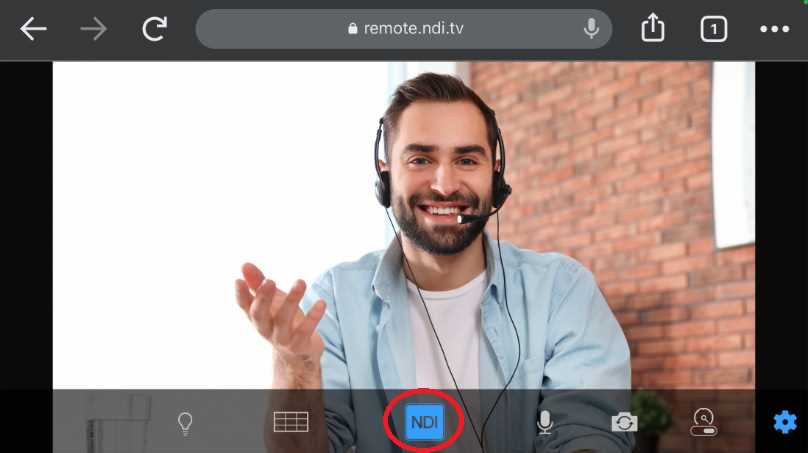 NDI Remote sources are readily available to NDI receivers such as NDI Studio Monitor below, or studio equipment and software.

On the NDI Remote app > "My Connections" tab, your can checkmark a connection, and invite someone to use it to send you his video, including a live video from a smartphone! :

Or others can invite you to receive their video (manage these invitations received in the "Incoming Connections" tab below):

-NDI Audio Direct: Bring audio in/out of any Digital Audio Workstation that supports Steinberg VST3 plugins (Virtual Studio Technology). For the first time this offers seamless integration of audio into NDI workflows, across a local network, in the cloud or any hybrid. Unlimited of audio channels (from Tricaster, OBS,..), everywhere in the world:

These above NDI 5 applications are also explained in that NDI 5 User Guide.

Let's have a look now at the other NDI applications:

- NDI Webcam Input (previously named Virtual Input): Designate an available NDI source on your network as the video input for popular software applications that support a webcam. In short, it will transform a NDI camera (even a NDI HX Camera App on your mobile device!) into a virtual USB input/webcam (up to 1080P 30fps) for Google Hangouts, GoToMeeting, Skype, Zoom, and more

.. for instance below Skype recognizes my NDI camera (IP) as an USB camera:

-NDI Studio Monitor : View or display any NDI video sources accross your network in real time. And it can do much more: PTZ camera control (including presets and focus) and joystick support, display options (flip, Tally indicator..), overlay (Picture-In-Picture), NDI output, recording, etc...even KVM remote control of any workstation (running 'NDI Screen Capture'!  You can even use your phone as a remote controller for Studio Monitor.

Below is an example of NDI Studio monitor receiving the NDI feed from the CM70-NDI camera: 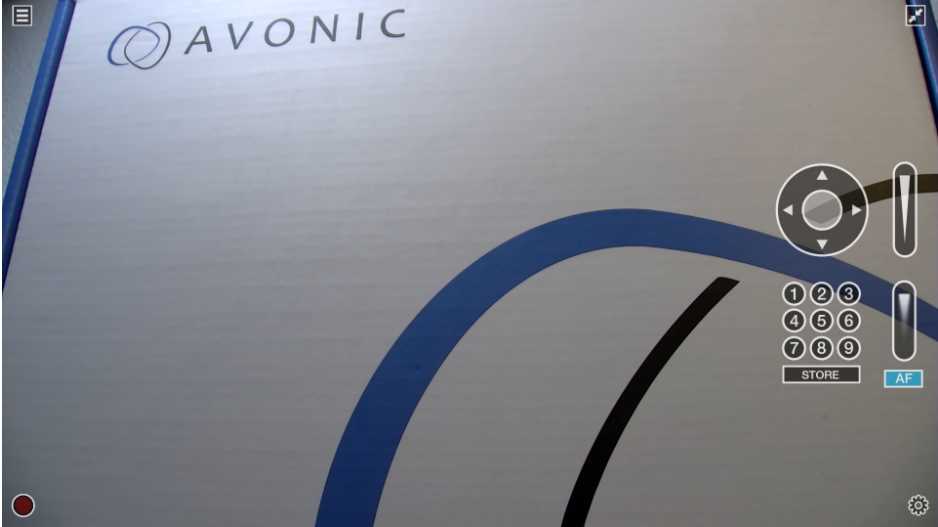 (read our article How to stream on the NDI Studio monitor with the CM70-NDI?)

- NDI Test Patterns (with free App available on app store for iOS NDI enabled devices): As soon as you will launch the software, it will send a reference signal (called "Test pattern") to other NDI devices or softwares on your network to confirm connectivity and enable audio and video calibration. NDI Test Patterns includes a variety of test patterns (color bars, individual colors, and IRE fields) and audio tones (from +4dBU (+0dBVU) to -40dBU (-48dBVU)) to ensure accurate color properties and appropriate sound levels.

You can even load images (including images with embedded alpha) as a source for a title or other overlay on your program like in that example below with NDI Studio Monitor: 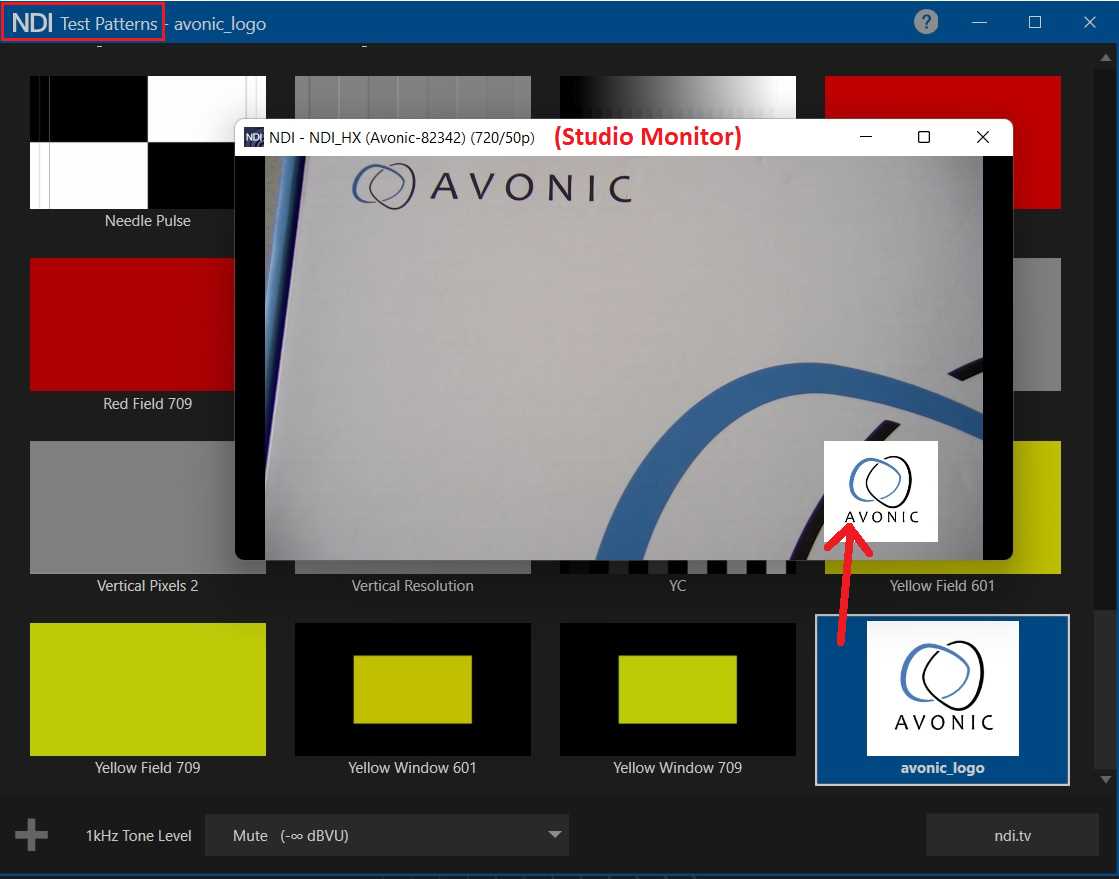 - NDI Access Manager: Configure your NDI channels as public or private, organize NDI systems and devices into groups, choose which groups are available to your device, and select which groups can receive your NDI channels—making it easy to manage the visibility and accessibility of NDI systems and sources on your network.. and with a dedicated VLAN, your security would even increases further! The advanced tab on the app allows preferences for TCP or UDP connections, multicast operation, and optional discovery server support.

Here is below an example with different permissions between different groups: 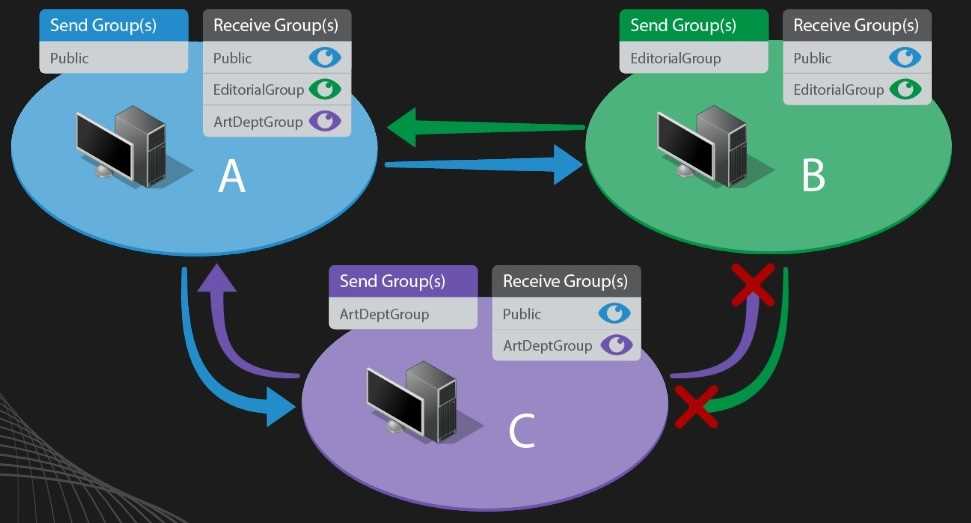 - NDI for VLC : Present video content and other supported multimedia to the network as IP sources directly from VLC Media Player, as shown in that example below where an USB feed is opened on VLC but available as an NDI source on NDI Studio Monitor: 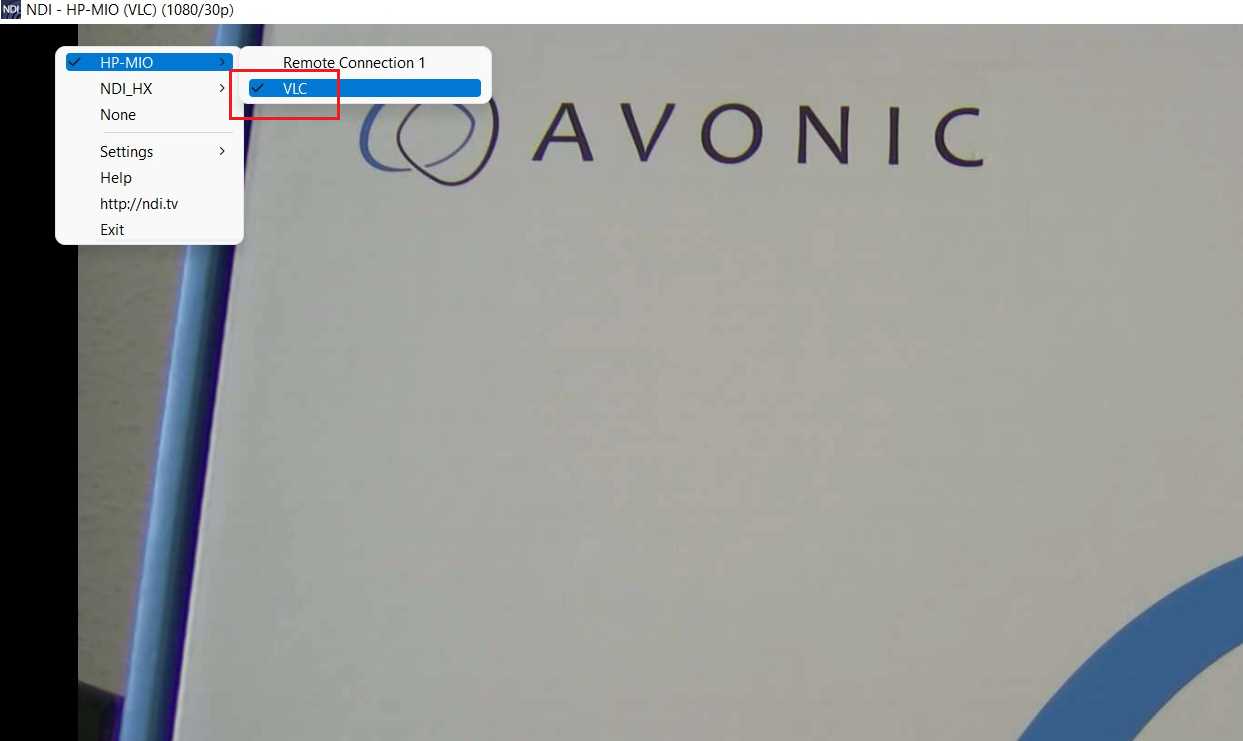 - NDI Screen Capture : capture the full-screen display, any combination of windows, applications, players, and audio/video webcams, or a specific region of interest from any computer, and present it anywhere on your network as a NDI output with audio.

Below is an example of a region of interest (ROI) captured by the NDI Screen Capture and sent as a NDI source to the NDI Studio Monitor: 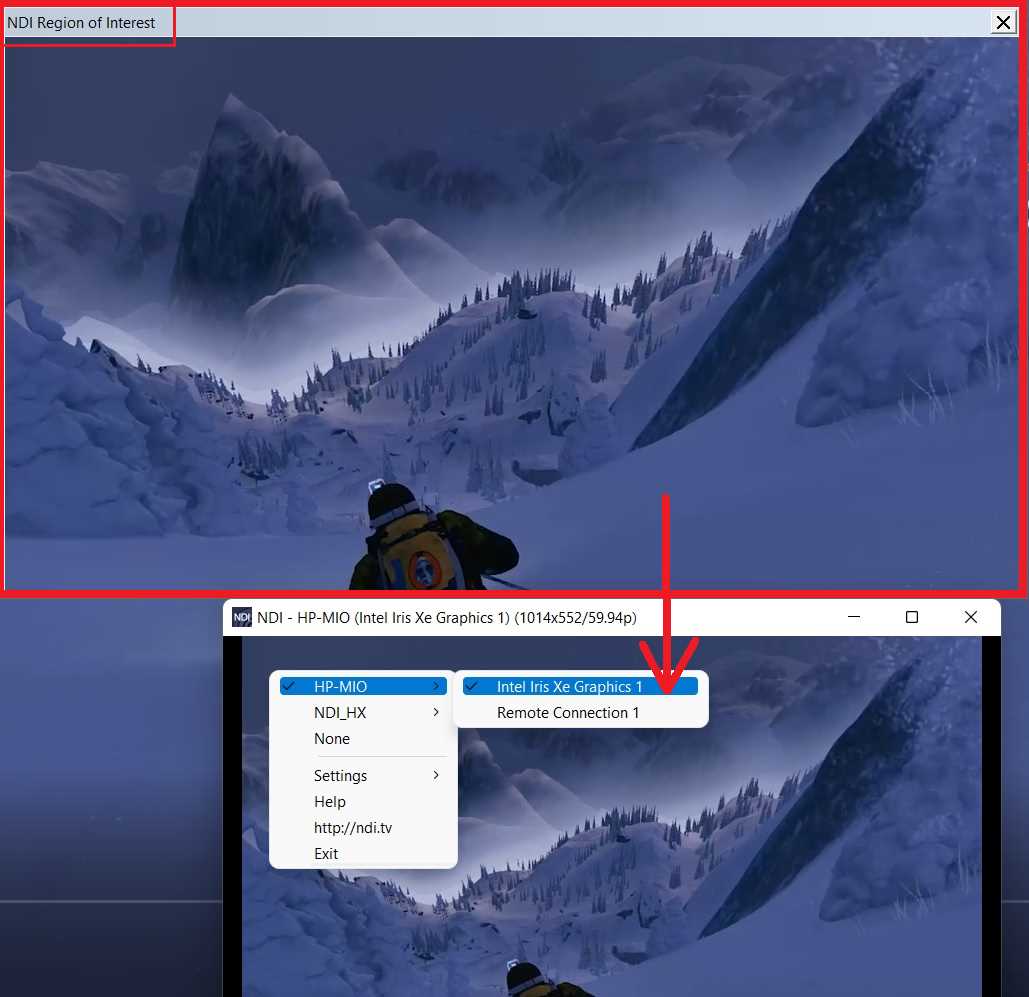 In that example below, Adobe Premiere Pro's program out is now a NDI stream, here shown on the NDI Studio Monitor: 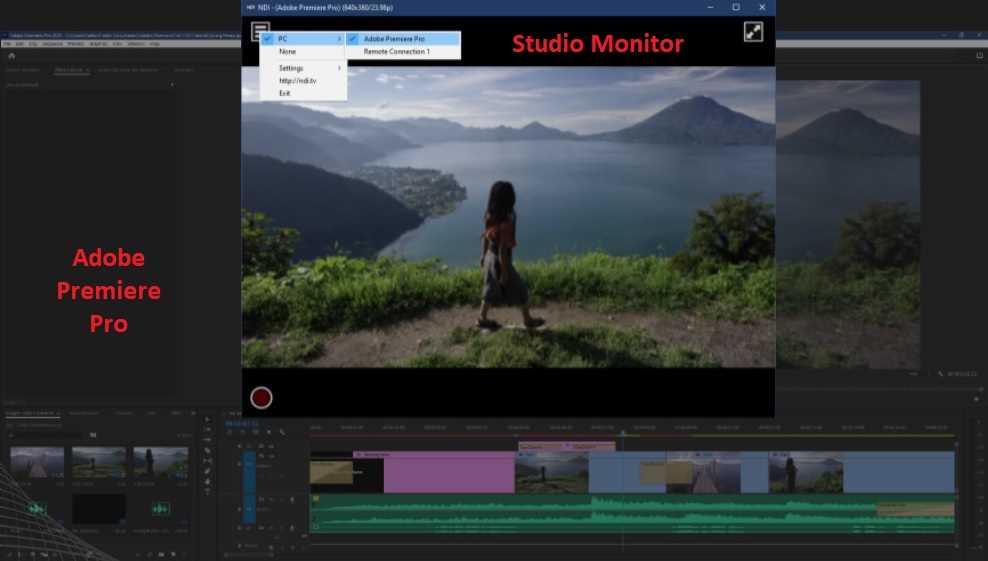 - NDI for After Effects: Enable real time, renderless playback and preview over IP - right from the timeline!

In that example below, Adobe After Effects's program out is now a NDI stream shown here on the NDI Studio Monitor:

On www.ndi.tv/tools, you will also find more NDI tools supported such as NDI Import I/O for Adobe CC, NDI for Final Cut Pro and the NDI|HX Driver

Without adding costs (complexity and latency I would add), NDI 5 allows you to control your devices and softwares, to add security, to manage AV networks over the WAN and internet and to share AV resources today in a global environment. And all based on inexpensive CATx ethernet cables that can deliver video, audio, control signals, and power the devices (where supported), reducing dramatically all types of costs, amazing isn't it?

* NDI Related articles on our Knowledge Base:

What is the difference between NDI® and NDI®| HX ?

How to stream on the NDI Studio monitor with the CM70-NDI?

How to transform a VLC feed in a NDI stream

NDI Remote: How to stream from a smartphone to a NDI device

Do I need an additional license to enable NDI on my CM70 series camera?