Both CM4x and CM7x camera series support the flip functions as detailed in the user manual:

The Flip-H mode turns the picture horizontally, while the Flip-V mode turns it vertically by 180 degrees.

When Auto Flip is on, the camera will automatically flip the picture (to get it straight UP, not upside down) when you put the camera upside down (the image will stand UP even accross a hard camera reboot)

Note that the flip function will be applied on all the camera outputs and even to the preview available in the camera web GUI in the case of the CM7x series (if needed, refresh the webpage). The OSD menu itelf will never be flipped (if this occurs, this would due to a 3rd party application like a videoconferencing platform software which flips both the video and the OSD menu on the local PC)

So, there are different flip functions, but also different ways to apply them, this is what we will try to explain below:

From the IR remote control you can press the key combination [*] → [#] → [9] (Press *, release, press #, release, and finally press 9 and release) to flip vertically and horizontally the image (it will remain even after a soft or hard camera reboot)

Note that the OSD Menu is visible:

- on the USB output of the videoconferencing CM41 and CM44 cameras

You can open the OSD menu by pressing the [MENU] button on the IR remote control to access the flip options:

The Autoflip option is available under the Setup tab: 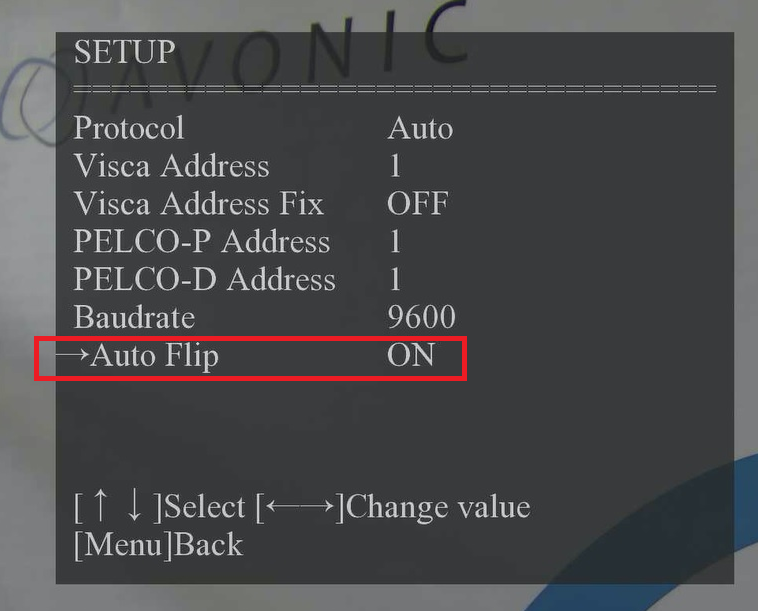 (The Autoflip is set by default to "ON" which means that if you put the camera upside down, the image will be automatically flipped to show it normal -straight UP, not upside down- even accross a hard camera reboot)

If the Autoflip is ON, you won't find any Flip-H (Horizontal flip) or Flip-V (Vertical flip) options in Camera tab > Image, but only if when the Autoflip has been previously set to OFF: 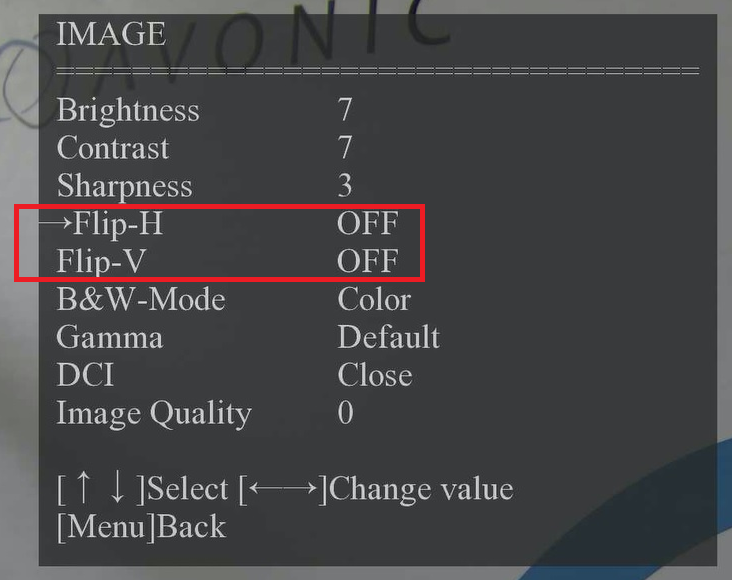 (If set to ON, the flip-H and flip-V remain even accross a hard camera reboot)

All the Visca commands are available in the respective user manual of the camera and these commands are the same for both Visca over IP and Visca over Serial connections.

Note that the default VISCA address setting is always 1 when using VISCA over IP. As all cameras are uniquely identified by their IP address, all VISCA addresses are set to 1, the serial addressing plays no part. For VISCA over IP, every command starts with 81 xx xx xx .

The pics below show the different flip commands results using the Windows Camera App (to get the USB stream from the camera, here a CM41) and Hercules (terminal to send commands by IP to the camera)

The flip commands below are supported by both CM4x and CM7x series: 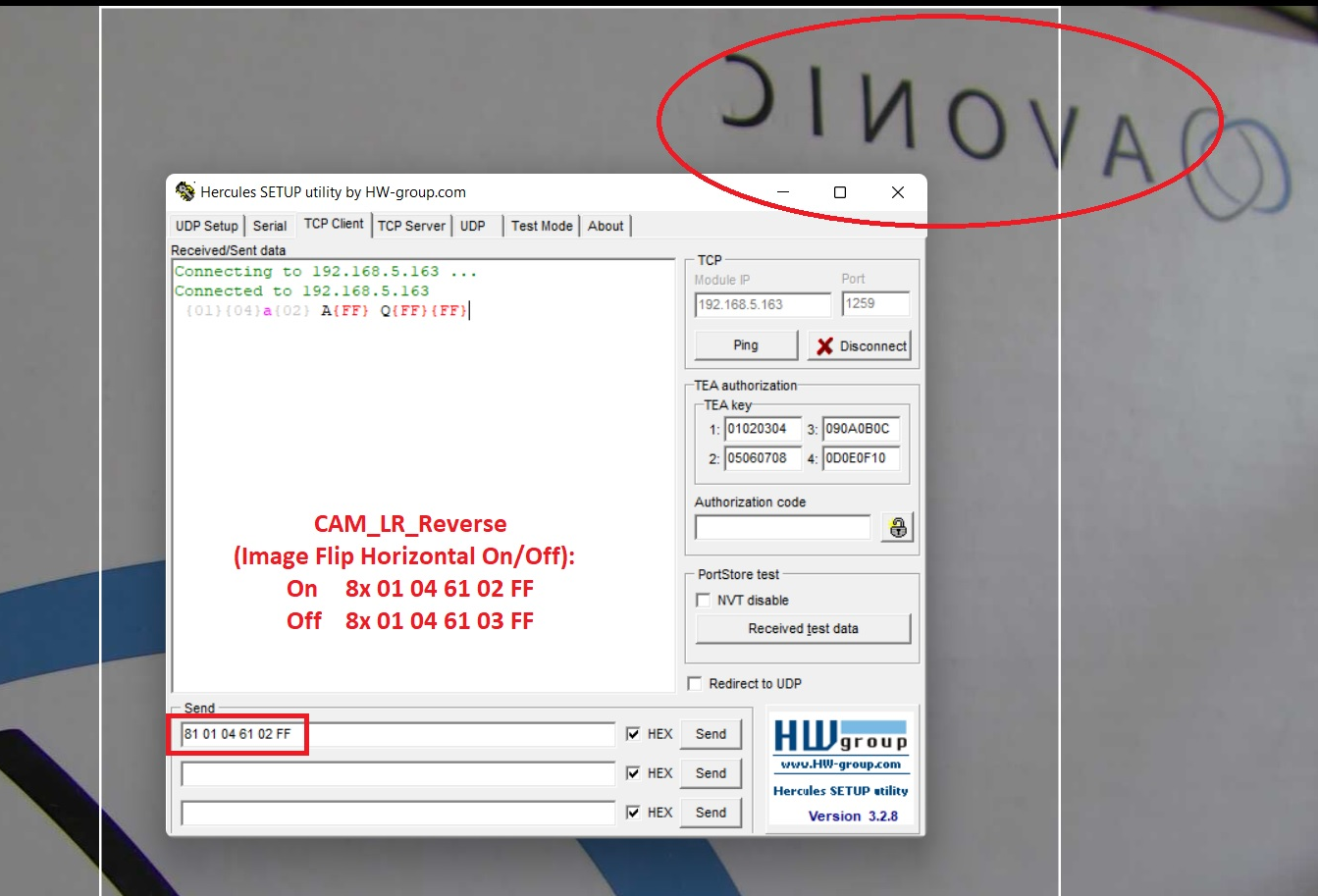 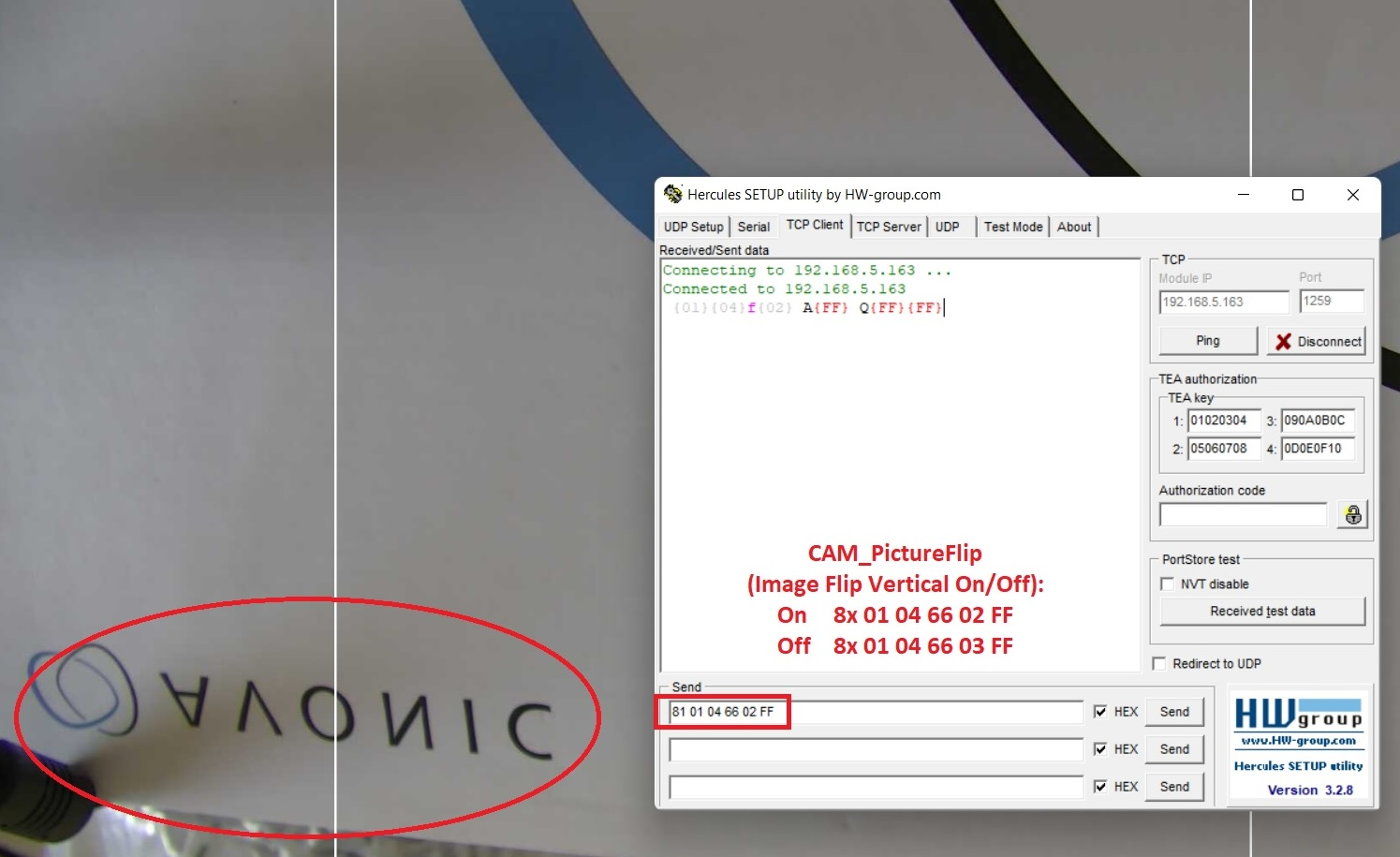 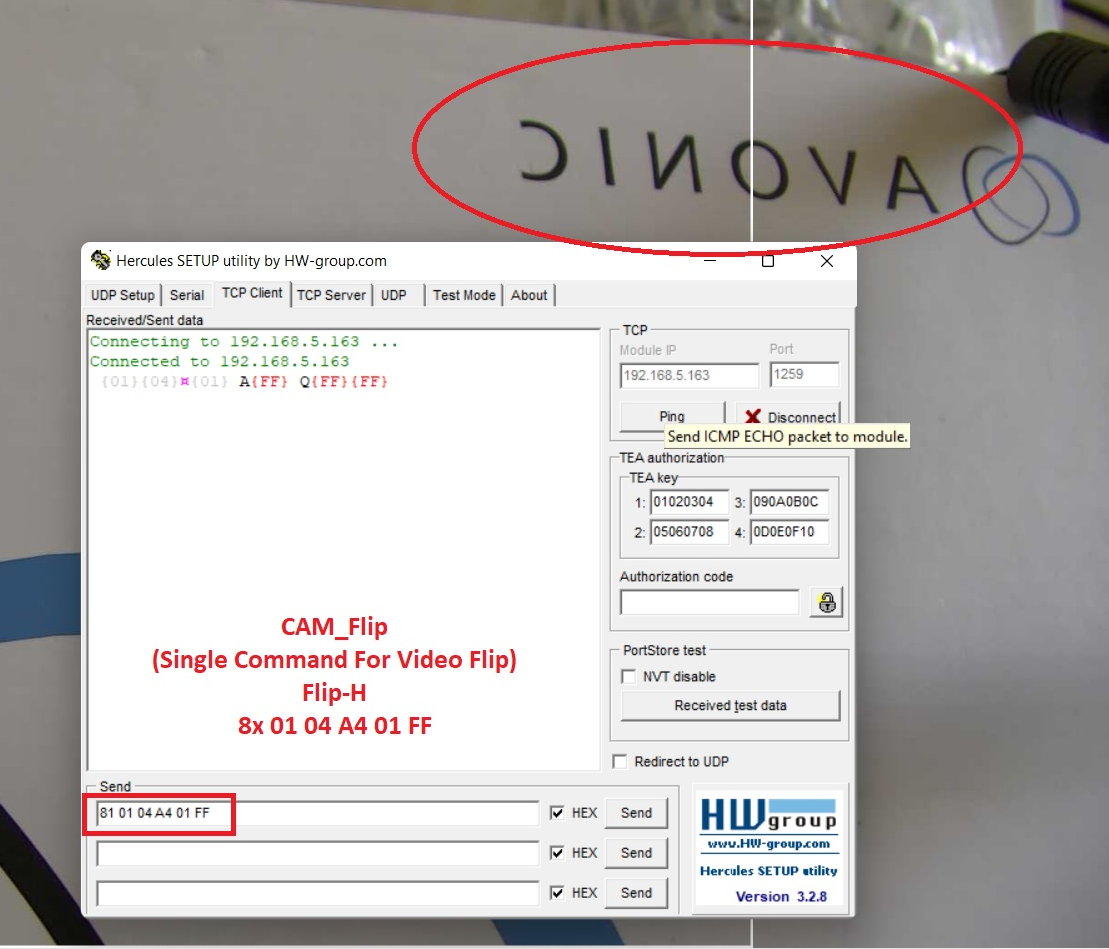 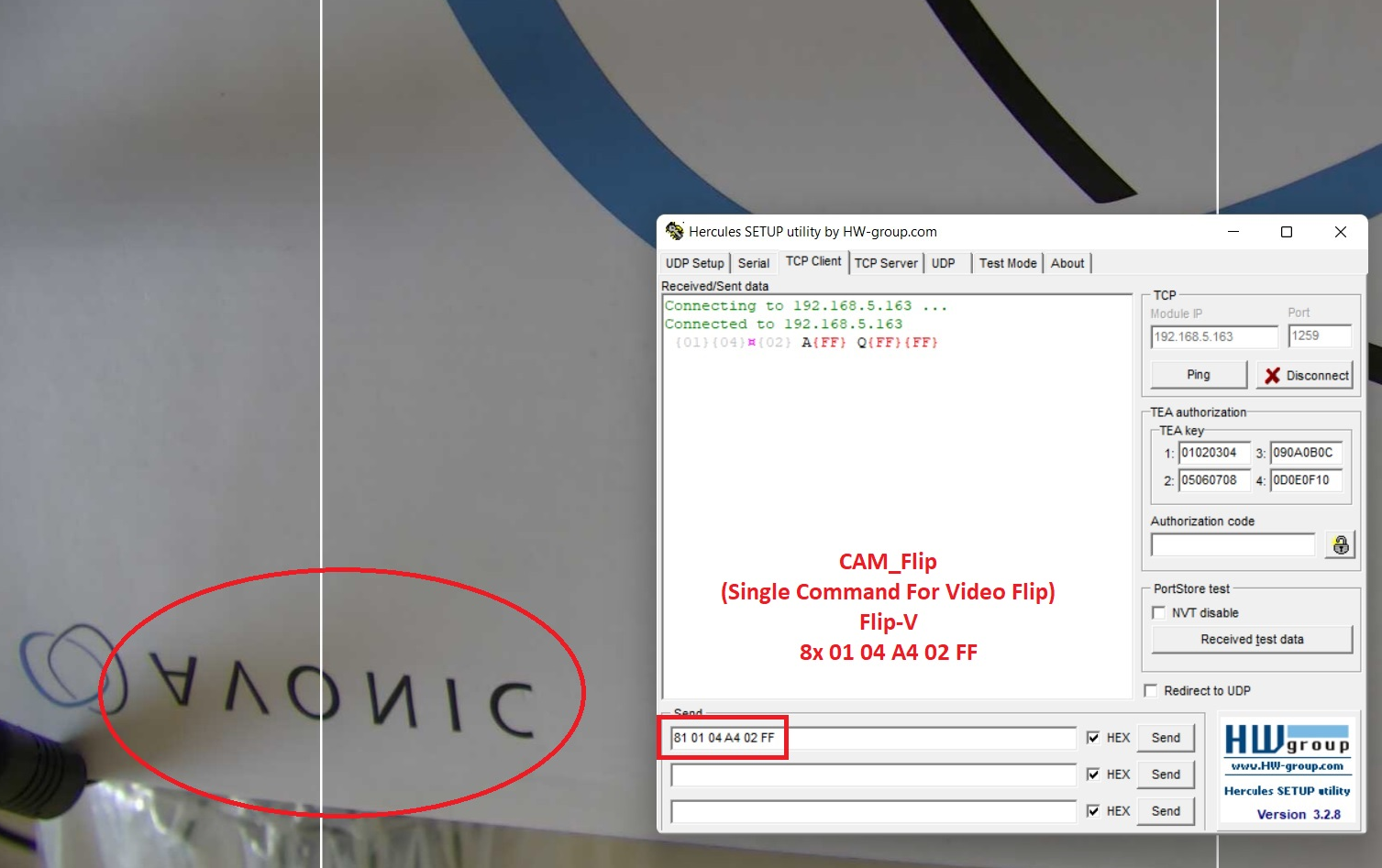 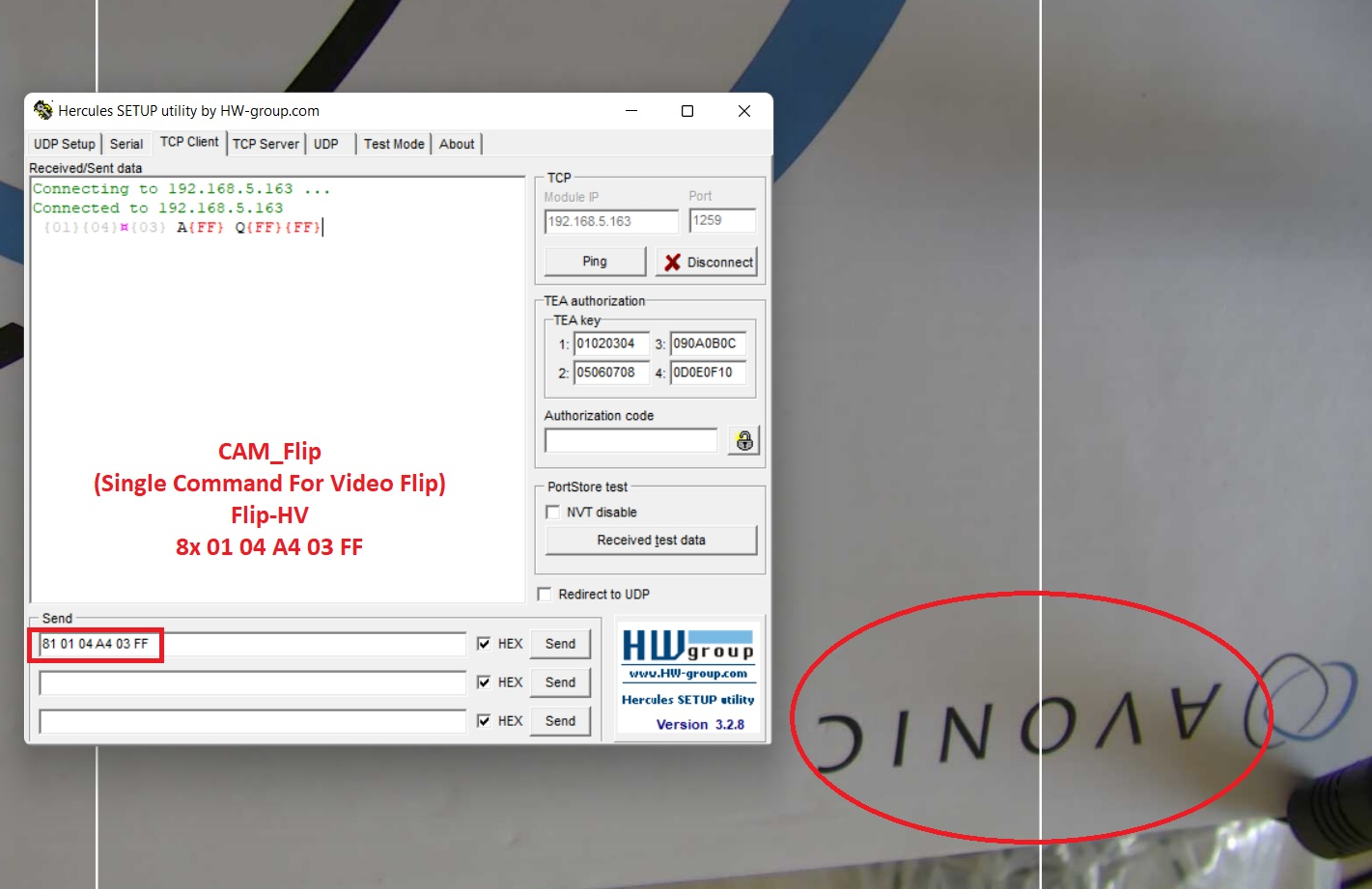 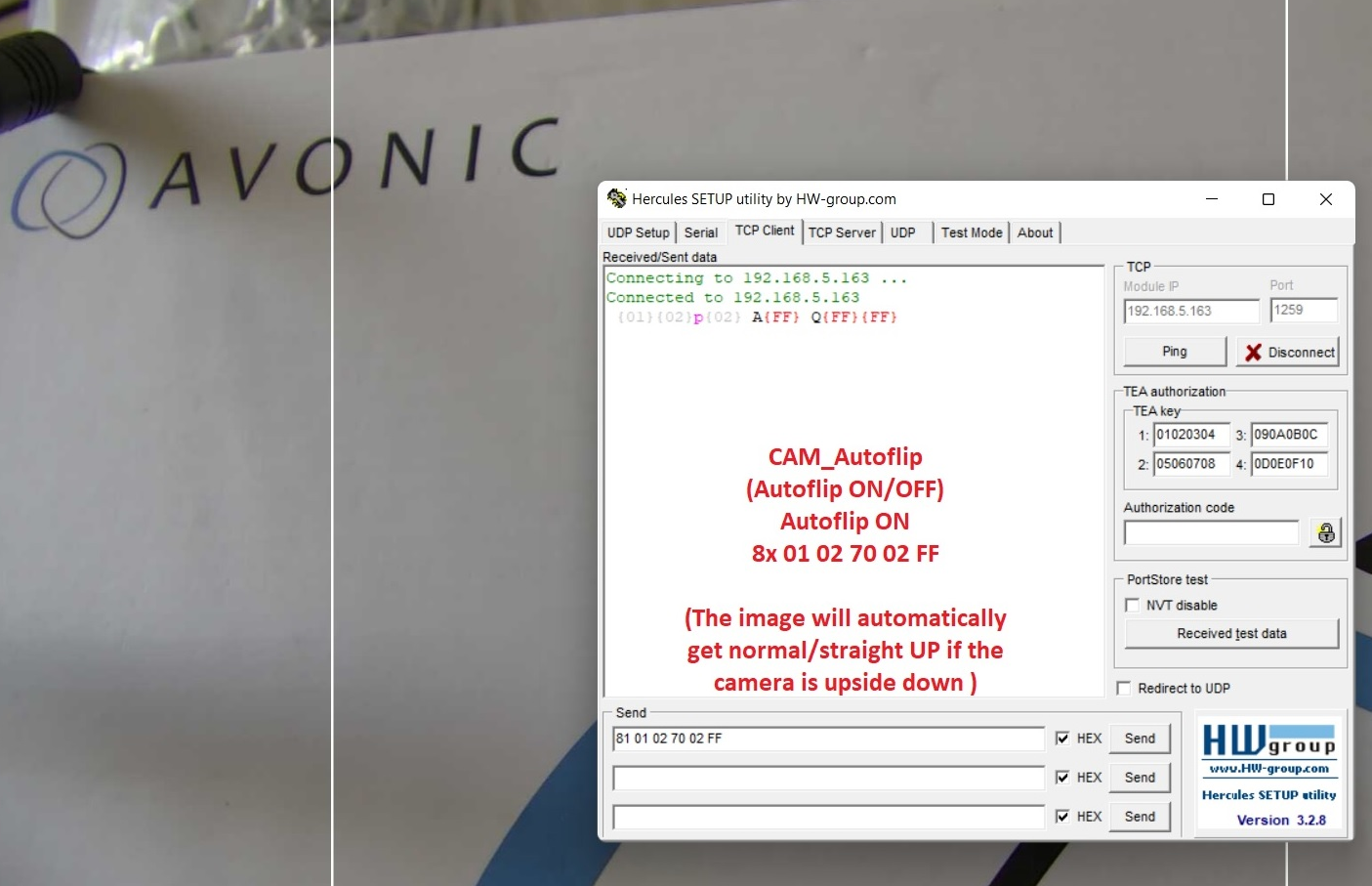 (Autoflip ON: The image will automatically get normal/straight UP if the camera is placed upside down) 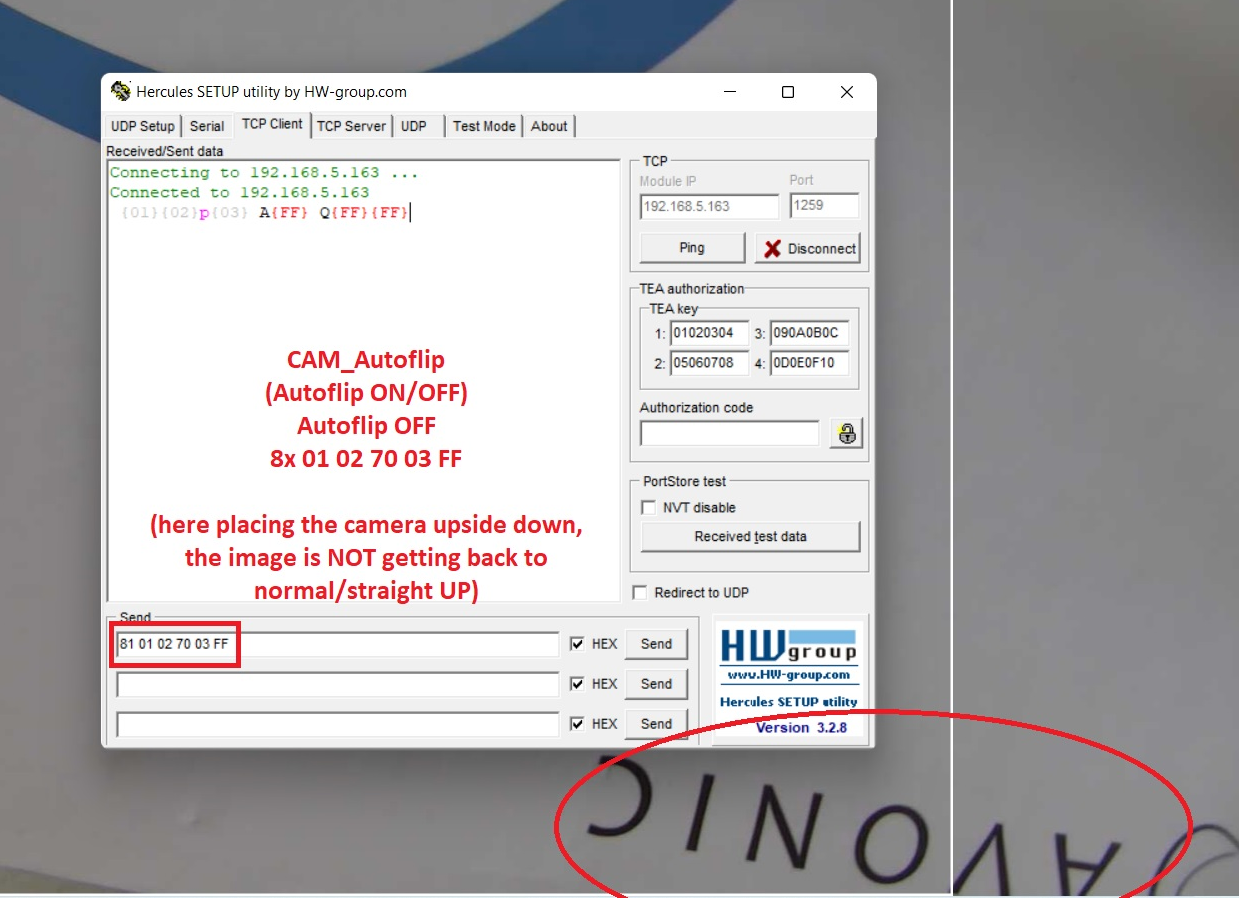 (Autoflip OFF: The image will NOT get normal/straight UP if the camera is placed upside down)

(This is an inquiry command)

To send a HTTP API command to the camera, you will need to copy and paste into your web browser the following: http://192.168.5.163/ajaxcom?szCmd= (192.168.5.163 is the default IP address of an Avonic camera but change it accordingly with yours if needed), completed with the one of the commands below:

If correct it should return: