How to create a bigger depth of field? Print

One good more in depth explanation is given in the article "Why is my camera out-of-focus?"

Objects or persons over a larger difference in distance won't be into focus when the camera is set on automatic settings. This can happen for instance with people/objects in the foreground as in the background of a scene to film. Another example would be that image below.

To fix that issue, a larger/bigger depth of field will have to be created by setting the camera on a specific higher F-Stop value (aperture measurements on your camera)

To do so first you need to set the camera to the AAE -Aperture Automatic Exposure- mode:

- from the camera web Gui (VIDEO tab > Camera Settings) as shown below. 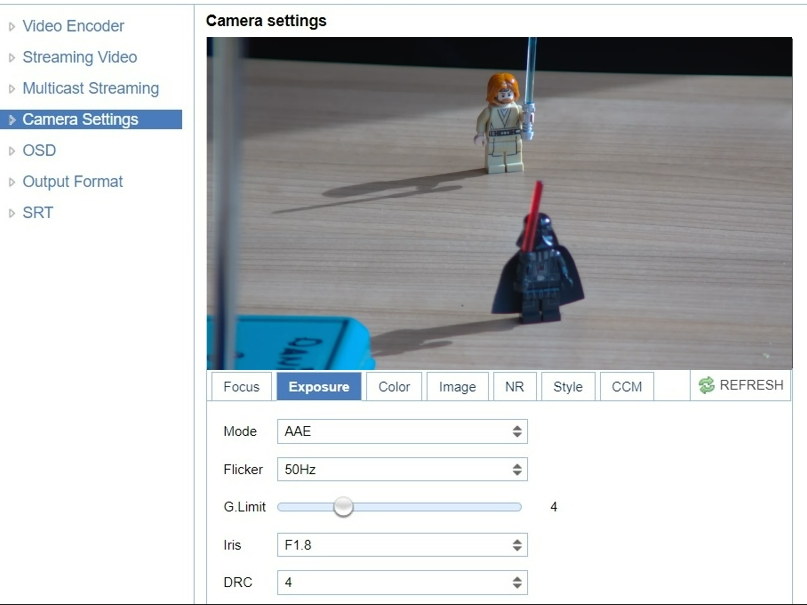 As shown in that image above, the AAE mode has the Iris set by default to the first F-Stop F1.8 which means that the iris is fully opened to get the maximum of light but on the hand this can lead to some focus and sharpness issues (as in that example above where the white figure is into focus and sharp contrarly to the black one)

Note, and as explained in the "Why is my camera out-of-focus?" , don't choose a too high F-Stop! for different reasons: higher is the F-Stop, less light is getting to the sensor, and more artificial settings will be needed adding finally more noise to the image. Another reason is that a high F-Stop requires a longer time interval to compensate the lack of light, which is not recommended when filming fast-moving objects.